When I first arrived to the boulevard last night, it was just me, Big Mama, and Raul, and it stayed that way for the next 30 minutes. I wondered if, in my incredibly tired state, God was giving us grace to have a chill, easy night at Broken Hearts.

Why I even let these thoughts cross my mind at this point is beyond me, since I already know when I’m most tired, the night will be best. When the streets look  empty, people seem to pop up out of the cracks by the time the Refuge service starts.

I always marvel in the power in simply showing up and God’s faithfulness to availability. When our ministry trains people on relational evangelism, three key elements are 1) Be Personal 2) Be Authentic and 3) Be Verbal.

Actions speak louder than words, and actually showing up demonstrates to others that they’re worth someone’s time. But without words – the reasoning behind our being there – it will stop at being worth another human’s time. Verbalizing that Jesus says they’re worth dying for points people to him for ultimate acceptance and hope.

Last night, a man on a hunt for drugs, stumbled into the end of our prayer time. “I just got out of jail today, that deserves an amen!” he told us. We agreed as he shared that he’d been suddenly released, expecting to be there for the next two years, but God got him out.

“You guys are f’ing cool,” he exclaimed later as we handed him pizza and water before the Bible study. He participated a bit as we went through a 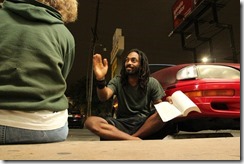 creative teaching by one of our team members on getting our identity from Christ.

As we wrapped up in prayer he said, “I just want to say, as an agnostic, maybe even atheist, I was moved by this tonight.”

“What was it that moved you?” I asked him, and he explained that all of it had impacted him: The message, God’s presence, and the actions we were taking that expressed love and God’s pursuit to him. “It goes against all of my scientific factoring of things. It makes me think God might be real.”

After a few more moments of sharing previous doubts and new faith that God brought him here,  he had convinced himself God is real. “I’ve never been this close to faith before. You being out here has made this 50 year-old atheist mind do a 180, so that’s no small thing.” We told him it was God and we were simply tools and happy to play a part. He agreed.

Our friend Louie asked if he’d like to open his heart to Jesus. “Yes, I would.” He wasn’t ready to accept Christ as his Savior, he still has some working out to do, but he said he’s close. We all gathered around and prayed, and as we did, he smiled constantly and had a look of such peace, joy and excitement.

He asked if he could take a bible, we gave him contact information, and he promised he’d be back next week. In my 7 years of doing this ministry, I’ve only seen something like that about 3 or 4 times, and it makes me hunger for more.

It speaks to me of revival and the epitome of ministry and disciple-making: Prepare yourself first by being made holy. Make yourself available where people are in need and God is drawing them. Watch God touch them without any coercion, fireworks, or fancy words, as we simply show up and speak out.

Then be prepared to have the joy of salvation restored….

Please join us in praying for “Joe” in his search of God, housing, and sobriety!