For typical small groups, 1.5 hours is an entire night of worship, bible study and prayer. Last night at Broken Hearts we spent that amount of time just sharing updates, and praying for each other as people on the street kept joining us. Normally this process is only about the first 30 minutes of our night, so that we have time to wander the street meeting people and inviting them to the Refuge bible study.

So just before  it was time to start the study, Antquan split people into groups of two to share and discuss their favorite verse before we got pizza.

“Can a few of us still go walk down the street to invite people?” I asked, concerned we’d miss out on others joining us.

“Um, no, probably not tonight…{pause, seeing the unchanging look on my face}….is that okay?”

So he and I walked down the street while we waited for the pizza to be ready. We never made it to the end of the block to the donut shop where everyone hangs out. The first person that crossed our path was a young hispanic guy walking quickly and keeping his eyes fixed on the ground.

“Hey man, how are you doin’ tonight?…Wanted to invite you to this service we have down the street called the Refuge….” Antquan got his attention, beginning to explain what the heck we were doing there.

The look on his face said, Not gonna happen, and why are you talking to me? while his mouth said, “I’m not really religious.” I expected the common, “thanks, but no thanks” kind of response and for him to continue down the street.

But he kept talking with us, and it was only minutes before we knew that he was homeless, recently out of jail, no family around, has been totally neglected and therefore often wants to end his life, seeing no point to it and bombarded with watching evil take place all around him. Hopeless would be a nice way of describing him.

Fast forward to Bible study where the groups designated earlier shared their discussions and reaosns for favorite Bible verses. Stories about what God has stopped them from doing (everything up to and including murder), how he gave joy and beauty instead of mourning and ashes, how a Psalm can create an uplifted spirit. Antquan concluded by tying them all together and giving a clear gospel presentation. 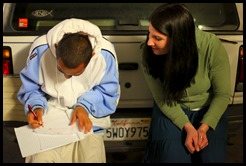 Earlier in talking to our new friend “Arnold”, I had thought of our friend Raul who has a very similar past yet found God in a transitional program after years in jail, and it drastically changed him. I was hoping the two of them could talk at some point that night, because Raul has a passion to help young guys in similar situations.

In the midst of the study, I watched Raul notice “Arnold” and go sit by him and start talking. At the end of the study and prayer, Gemma joined them. A few minutes later I joined them as well to see how things were going, as Gemma asked, “So how are you feeling after what Antquan shared?”

“Overwhelmed,” he replied.He said he feels like something is stopping him from really accepting Jesus. We talked more about that, about his past making him feel unworthy, about God’s acceptance. “I’m open to learning, I want to know more…I don’t want to get kicked out of a church….And you guys are giving me all this attention and I’m just probably gonna go slack off…it makes me at least want to try and do better though…”

We were all able to agree that God had brought us into contact that night for a reason. It was no mistake, He was speaking to Arnold.

I just “happened” to have all kinds of resources in my car that I don’t usually – a package of treats with a message about not being alone when you have community that a lady from church had made for me to give to people, info about our laundry service the next week, and a non-cheesy tract my dad had randomly sent me a while back to use on the street. I never hand out tracts, but in this moment it seemed to fit, summarizing all Antquan had just shared and giving Arnold somewhere to start on his exploration of God. I also gave him info about church, so by the time we left there was just about no way he couldn’t find us or get help.

There are a lot of fronts on the street, people broken but acting all pulled together and never quite surrendering to Christ. It had been a while since I’d seen someone in this fresh state, out of jail, depressed, and responding to attention and hope in such a significant way.

That’s what the Church exists for. That’s why it makes complete sense to hang out in a parking lot at 1am.

Wrapped up in his feelings of being overwhelmed was one of his most profound responses:

“I’m just not used to so much positivity.”

After he explained a bit more about negativity and hard things in life, I asked, “So you’re not used to  hearing positive things like were shared earlier?”

“No, I hear a lot of that….I just never see people doing anything good.”

While I don’t know everything about Arnold or exactly what was happening in his head and heart last night, I think I could safely hypothesize this from our interaction:

Arnold has heard about Jesus, he’s attended church, he’s heard positive messages. What’s  been missing is seeing anyone actually do anything, acting in a away that demonstrates the reality of that good news. It’s quite possible that the message could have been about anything that night, but what rocked Arnold’s world was being actively pursued and loved in conjunction with the gospel message.

Broken Hearts has no superhumans or perfect Christians. I didn’t want to go out that night. I would have preferred to go to sleep at a decent hour, not at 3:45 in the morning. Antquan didn’t do much more in our initial conversation than ask thought-provoking questions and invite a guy to sit and eat some pizza, and he didn’t speak the most epic sermon ever.

We can all make that choice to go in obedience to do what God wants from us, remembering that there is a dying world that not only needs to hear about the hope and joy of Jesus, but to see Him.

“What good is it, dear brothers and sisters, if you say you have faith but don’t show it by your actions? Can that kind of faith save anyone?” – James 2: 14

One thought on “Can That Kind of Faith Save Anyone?”