The best nights on the street are the “dynamic” ones, where so many levels of significance layer upon one another that I leave unsure of how to even process or thank God or pray when I arrive home.

Last night was one of those. I’ll skip large chunks to keep this from becoming an essay, but when we finally all gathered to share prayer requests, the night took on a life of its own. One of our regulars shared about his hope to move and be closer to family, followed by oddly humorous stories of being caught up in his nephews drug deals. His dream is to move back with family, get a large home in a far more affordable location, and create a way to help people like his nephew coming in and out of jail to keep them out.

Another regular then shared about her family worries, not knowing where one of her sons is, being misled and confused by family about how her father died, and inevitably pouring tears out over the hurt, fear and loss.

Antquan questioned how we deal with these things, and conversation blew up from there amongst our friends while the rest of us sat and listened. Our friend from above advised that she needed to let those pains go and trust them with God, or else the stress would eat her up and harm her health. Another guy chimed in who follows Islam and agreed how much we have to give things to God and then move on from things we can’t change. How important it is to “let go and let God”, gazing off while mentioning his brother who died. He doesn’t typically engage much in our Refuge service, but he was playing a significant role in this conversation. 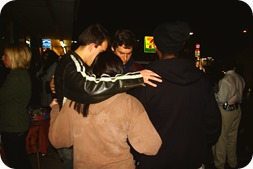 Talk bounced around this way for a while, how to deal and how we must trust God with these fears and losses of family. Then a woman, “Tracy” we’d met just a few weeks ago after being released from prison without a place to go showed up and shared how significant it had been to meet us, even in her hardships. She thanked the previously mentioned woman and her spouse for their support, as well as others who had shown her love and given her support.

“I still have their numbers with me and I’m so grateful for meeting them and their help”. I forget the rest of her words exactly, but essentially it was that, though she’s still not in a program, she felt the impact of people who prayed with her and sought to help her in her worst moments. People who simply cared and how that impacted her.

“I’m doing better, but I need to put down the bottle. I drink because I hurt” and proceeded to share her own family losses, those who stole from her, the father she didn’t get to say goodbye to, and the son she hasn’t seen in years and doesn’t know.

Conversation looped back around to how we deal with the hurt, and finally we all came back to scripture and the continual surrender to God of all our struggles. We then broke up into more intimate groups for prayer, and then more people joined us, ready for pizza and Bible study.

“Tracy” offered to pray for the food, and it went on record for the longest BH prayer thus far. “I was intoxicated when I came here, but now I’m sober, God you did that” and while it seemed a bit repetitive and a slight ramble, it actually brought me to tears. She cried out to God like I wish I did more often. Her hurts over seeing kids on the street selling themselves and pleading with God for their parents to accept them and for them to go home, from a mother’s heart, reflected my own repetitive cries to God on their behalf.

Her desperation for something different, for personal healing, and the healing of the streets was so pure and true, I felt like I had a sister who prays for the brokenness of the city, and a daughter of God I couldn’t imagine that He’d turn down  in her tears. There is something powerful about someone who’s been in prison, lost people, done “bad stuff” and should be tough and numb to it, weep over the world of which she’s a part. The kids sitting next to her, involved in drugs and prostitution definitely noticed, and her passion in that moment were far more influential than I think some of ours could ever be.

We then dove into the Bible study and had more lively discussion, and didn’t end until around 2am, about 45 minutes later than usual.

The things I heard, and the dynamics last night, were beautiful and rare. It was not just going through the motions, it was personal and intense and meaningful. I could barely remember how exhausted I’d been that night before coming out, wishing I could just go to bed. As usual, I left revived, excited about what God is doing, and reminded that people want his presence, and to know that someone cares.