“What are you free from?”

“What are you freed to? How have you changed?”

“I can rest, love, I don’t think I’m being chased, and I can trust people now.”

Words from a testimony last night at a baptism in a parking lot on Santa Monica blvd in Hollywood last night at 9:30pm. One of the most powerful moments I’ve experienced in my nearly 7 years being out on the street.

Just a few weeks go, the team met a young man with a grown man’s beard and baggy, dirty clothes named Robert. Homeless, addicted to meth, and estranged from his family and wife, he ran into the Broken Hearts team on the street. Helen and Raul, our most faithful couple who now help get others out of the life they too were saved from, got him into a transitional program. They still attend church there, and took Robert under their own wing. 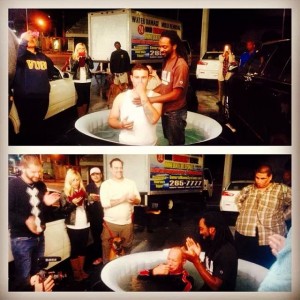 However, he didn’t last long in the program and was quickly back out on the streets. Yet in the process of reaching out to him in the middle of the night in a sketchy part of the city, Robert gave his life to God.

I got the change to meet him a few days later, still looking and living homeless, but ready to change. He’d been sober for a few days and joined us for ministry, and then a few days later at a fundraiser concert for our free monthly laundry service.

That night he asked Antquan how to “make this official”, meaning his surrender to Christ. Their conversation led to baptism, and Robert decided he wanted it to happen on the street, where he was saved, so he could be an example to others.

Last night, before laundry, we filled up a tub with water while he shared his testimony, holding a bible in his hand. With freshly cut hair and trimmed beard, and a nice white shirt and jeans, he looked like a new person. A perfect reflection of his inner change.

He shared how his paranoia that he was being chased by hundreds of people has turned into rest and peace. He’s once again talking to his wife and may be able to see his kids again. He said he wants help from our community in helping others. He shared his search for wisdom in the book of Proverbs, in addition to going through the books of Exodus and Matthew with Antquan’s guidance.

Truly, I have never seen such a rapid, genuine change on the street. Yet this is exactly what God has in mind – to seek out the broken hearted and bind up their wounds. To give them gladness instead of mourning, and make them repairers of ruined cities. Robert was a living example of the power of Christ to about 35 onlookers last night.

He told me afterward about the length of time he spent recently pondering one verse on wisdom, and the riches he’s discovering in the Word of God. He expressed his desire to help others change and be an example, and said that 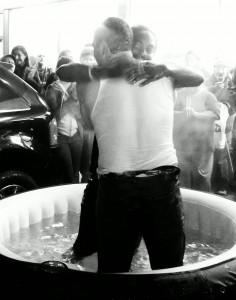 his wife is more surprised about him becoming a Christian than getting off of meth. He told her, “You know how I don’t really have family, how they don’t talk to me? Well I have a new family now.”

“Yes you do,” I assured him. “That’s the beauty of the body of Christ. You’re not alone.”